Let me make things simple for everyone. This is a great tablet and a beautiful device. It has everything 97% of tablet users need and want. The 3% that are power users can pay up for an iPad.

As we continue our exploration of the various Amazon Fire tablets, we move on today to Fire HD 8, that rare combination of a budget tablet that won’t completely let you down on the performance front.

One of the most crucial things when you’re entering the lower end of the tablet market is to peg your expectations to avoid disappointment. Think about it… If you went into a car showroom and took a cheap and cheerful beater for a test drive, you wouldn’t expect Ferrari acceleration or Bentley comfort. It’s no different with tablets.

The other thing we always take into account is that, for varying reasons, not everyone wants or needs an iPad Pro or range-topping Android.

If you are on the trail of a pocket-friendly tablet that will stand up to a bit of punishment and perform all the tasks you need without letting you down, read on.

First up, a shotgun summary of the upside and drawbacks of Fire HD 8: 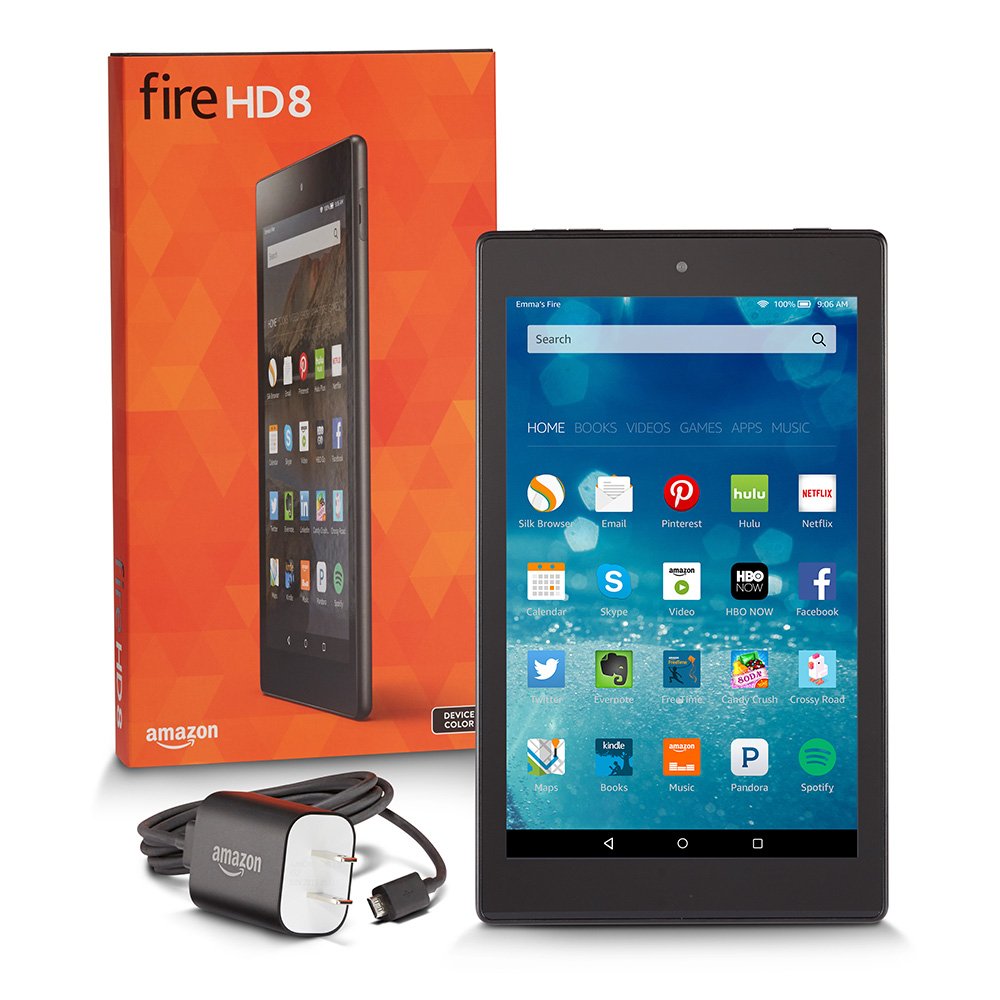 Superlatives are often thrown around in product reviews and we constantly hear of products being “the best” before being rapidly dethroned by the next best thing.

Thing is, everyone has completely different wants and needs. The best tablet for some falls far short of the mark for others. It’s very subjective.

Read on as we break down everything that Amazon Fire HD 8 does. That way, you can decide for yourself whether this really is the best inexpensive option for your requirements. We’re not here to forcefully nudge you into buying something inappropriate. We’re here to explore all your options and make your life easier.

Amazon tends to keep the core design fairly consistent with the Fire range. As the old adage goes, why change a winning team? 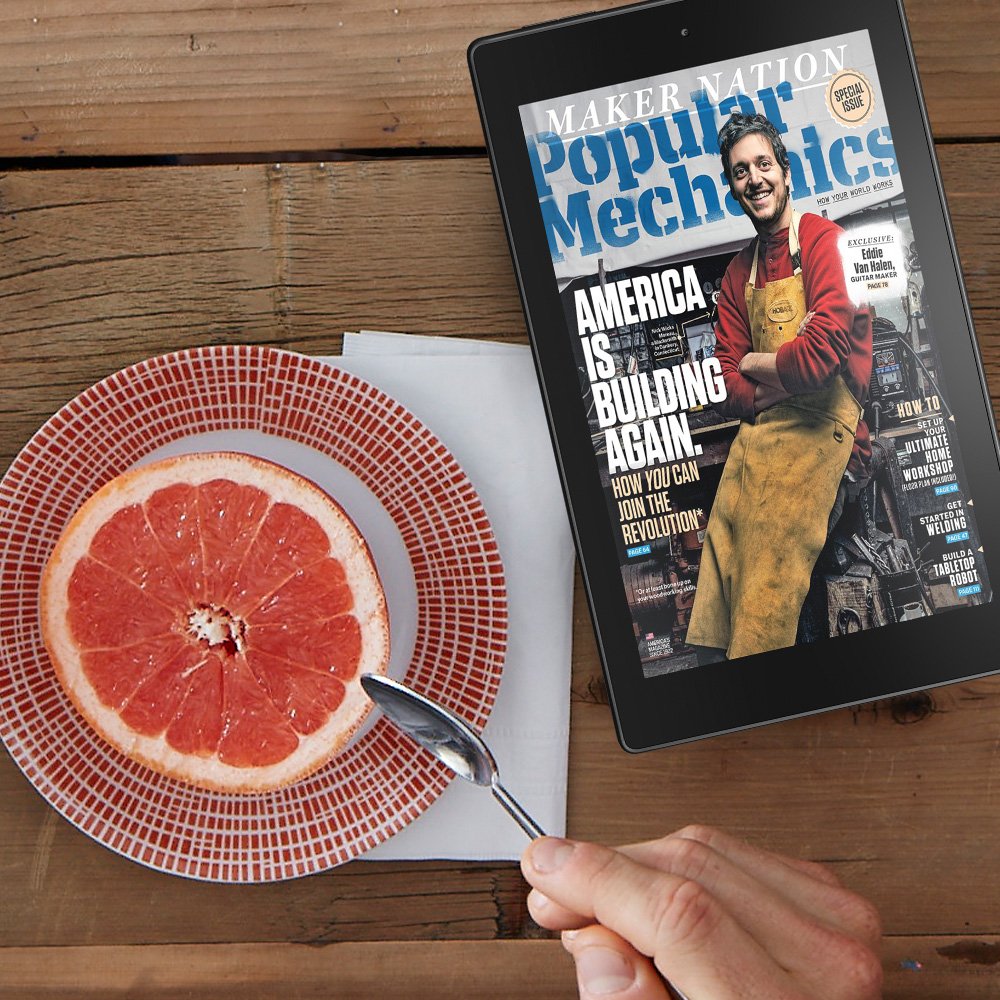 The plastic casing is extremely rugged so much less vulnerable in the hands of your kids than something like iPad Mini.  While it might not be waterproofed, it’ll certainly stand up to some bumps and knocks and it’s built to last.

You’ll get no noticeable flex with Fire. The uppermost part of the case moves in a bare fraction under heavy finger pressure but it’s nothing to worry about.

The new edition is very slightly thicker than the previous generation.

Bezels are pretty meaty but it doesn’t have the same cheap and instantly dated look of many tablets at this price point.

Like all Fires, the screen has a tendency to accumulate dust and fingerprints so bear this in mind. Just invest in a decent screen-cleaning cloth or some wipes and keep on top of it regularly.

The upper edge of Fire HD 8 houses all the buttons with power on the right and the volume control to the left. There’s a headphone jack between the buttons and the micro USB port alongside.

Amazon has managed to design Fire HD 8 so it doesn’t appear like a piece of tat – a common problem with cheaper devices – while it’s also robust enough to take a bit of rough and tumble. With different colorways at your disposal, you really can’t knock Amazon for what it’s done design-wise with Fire HD 8. 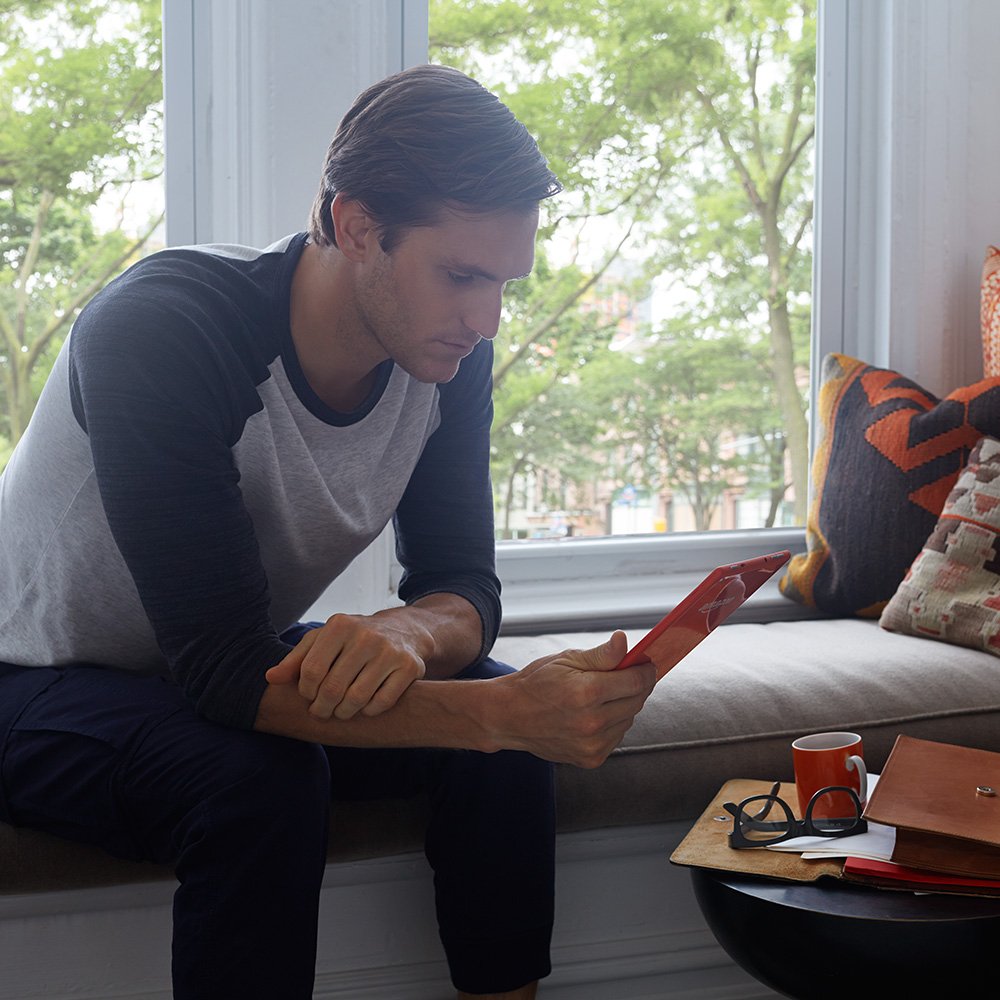 Web connectivity is limited to dual-band WiFi only. Since home WiFi and hotspots on the hoof are ubiquitous now, this is not really particularly limiting.

Amazon Fire HD 8 comes in a choice of 4 finishes:

In terms of storage, things are beefed up considerably from Fire HD 6 and Fire 7. The base model is 16GB while you can enjoy a more substantial 32GB model. This is the one we recommend. There’s also the option of expanding by up to 256GB along with unlimited Cloud storage for all your Amazon content.

While Alexa is no serious rival to Echo Show if you are looking for an always-on system, holding a button down for 1 second as with Apple’s Siri is hardly a back-breaker. You will need to be connected to WiFi to summon Alexa’s help, though.

Whether you want to access your content more rapidly, perform basic tasks without pressing your fingers into action or harness Alexa to keep your smart home running, the world is your oyster.

This kind of functionality on a budget tablet clearly demonstrates Amazon’s commitment to providing the most possible value. They are never content to rest on their laurels. Rather than letting older models wither on the vine, they introduce tweaks like this that keep customers coming back for more while attracting new users into the bargain.

Where the display on Fire 7 leaves plenty to be desired, Fire HD 8 sees a larger 8-inch screen with a more respectable clarity. You might not get the stunning crispness of iPad’s Retina Displays but then you’re not paying for that either.

That said, screen specs are relatively rudimentary. The new IPS panel gets a great deal of hype but the results are not exactly stellar.

The screen itself is fairly reflective so that blacks appear to a certain degree grayed-out. Contrast is poor in a brightly lit environment. Boosting the brightness setting goes some way to mitigate this but it will obviously drain the battery more rapidly. There’s no auto-brightness functionality so get used to making these tweaks manually. This is perhaps a little inconvenient but by no means a deal-breaker.

If you want to take things outside, that high brightness comes into its own and goes some way to combating the reflective nature of the display. It’s usable and you can’t ask for much more than that. Reading or using electronic devices outside is always less than ideal however much you pay for the privilege. Count yourself lucky with Fire HD 8 that it’s fit for purpose under the sun

You’ll get 1280 x 800 pixels which is not the sharpest resolution on an 8-inch expanse of screen at 189ppi. Still, Amazon’s pioneering software does a serviceable job of smoothing out the rough edges. Small fonts appear heavily pixelated and the HD in Fire HD 8’s name is slightly misleading. You won’t be confronted with what you might have in mind as a high definition display but, again, step back and consider the price.

If you think Apple reel you into their world, Amazon trump this with the shamelessly service-led software set-up imaginable. Think of Fire HD 8 as a batch of homescreens all leading to Amazon products and you get the general idea.

Read our exploration of Fire 7 for a detailed breakdown of Fire OS. We don’t like to repeat ourselves. In a nut, this operating system is a very different version of Android slanted exclusively toward driving custom toward Amazon’s own services. On the plus side, the interface is easy enough to use and fairly intuitive.

Rather than becoming angry at this, consider the fact that by making money in this way, Amazon is able to offer a top-notch tablet at a rock-bottom price. There are always some sacrifices to be made if you want a genuine bargain.

Thinking of sacrifices, if you want to get rid of the barrage of ads, invest in the ad-free version and enjoy a purer, less distracted experience.

Amazon’s App Store might not have quite the range of Google Play but you’ll get a wide selection of almost everything you might conceivably need.

To be frank about performance, while the quad core processor might sound good, speed is slower than an Android with similar specs. Scrolling tends to be a little jerky and there is a degree of lag.

Gaming is surprisingly effective on Fire. Sure, there’s the odd bit of blur and frame-rate slowdown but overall you’ll be able to enjoy your favorite games on a screen more than substantial enough to liven things up.

RAM is doubled up from Fire 7 but 2GB is still hovering around the bare minimum acceptable.

WiFi has been favorably tweaked and the dual-band on offer makes for a superior browsing experience while delivering a bit of extra pace. It’s not world-beating but more than cuts the ice for most simple web needs.

You’ll get a pair of speakers on Fire HD 8 rather than the single one present on the lower-end Fire models.

While you won’t enjoy booming surround sound, there’s a reasonable stereo effect. Volume is more than adequate and you can crank it all the way up without losing out on too much quality.

Again, for an inexpensive tablet, you can’t level too many complaints about the sound quality really.

Amazon claims that this improved version of Fire HD 8 now yields up to 12 hours of battery life. Unlike the baseless claims made by many manufacturers, Amazon are upfront and accurate in this area.

Standby time is even more impressive. Fire will keep ticking over for 4 days meaning you’re safe if you travel and happen to forget your charger.

Charging is done via micro USB. It’s a good habit to fall into charging overnight to minimize disruption. It’ll take 6 or 7 hours to get it back up to 100% and ready to roll.

Are you about to take an 8-inch tablet out and about expecting to capture competition-worthy snaps? Or, is it more likely you’ll snap a selfie or two, the occasional indoor photo and enjoy video chatting instead?

The rear camera is a lousy 2 megapixels meaning image quality is pretty dire. Stick to simple snapshots when you don’t have access to your cellphone and expect grainy images lacking in any real definition.

For a basic video call where you can at least make out the likeness of your chat partner, Fire HD 8 delivers but don’t expect a sharp, HD experience.

Think of the cameras as better than nothing. That’s about as charitable a description as we can serve up.

An 8-inch tablet is obviously not cut out to replace a dedicated e-reader. If you’re looking for a device purely designed for this purpose, you’ve got a fine choice of Amazon’s enduring Kindle range.

With that said, Fire HD 8 makes for a very pleasant reading vehicle. The size and feel resembles holding a furled book or newspaper.

You’ll enjoy Amazon’s enormous range of e-books along with a good range of magazines and other print media to leave you fully satisfied.

Text can seem a little less crisp than the E Ink on Kindles but that’s a small trade-off for the boosted functionality you get with a tablet.

Where the lower end of the Fire range leaves us somewhat underwhelmed, we have to stridently recommend Fire HD 8.

If you accept its shortcomings as a direct result of the super-keen pricing and keep your expectations realistic, this all-new version of a classic tablet really offers wonderful overall value and more than worthy performance.

For a solid and dependable tablet with a screen large enough to enjoy movies on in a device small enough to hold one-handed, the Fire HD 8 punches above its weight.

Check it out here and come back soon!

This site is powered by the best Hosting Provider A2 HOSTING